In June 2018, Droniada 2018 took place and was a significant step in implementing autonomous BVLOS flights. Six academic teams, using unmanned aerial vehicles of their own construction and programmed by themselves, took part in a challenge where a drop spot for delivering serum in a post cataclysm scenario had to be found in fully autonomous flight. In order to take part in the competition, each team had to implement a detection and avoidance algorithm so that no danger came to other teams and the public.

Behind the curtain, there were another, more important goal to be achieved. That was the risk assessment for both: autonomous flights and flights in the indicated geofenced area, by performing mission, related to the business goal. The output of tests is currently used by ANSP and CAA to perform SORA analyses (Specific Operations Risk Assessment). In parallel we have successfully tested ADS-B based, Plug & Play infrastructure.

The mission was performed in a 850m x 400m x 40m geofenced airspace. The serum drop spot was not known to any of the teams and in the real world was marked by an electronic beacon. The drones were equipped with ADS-B transponders, manufactured by the Polish company Aerobits which, among other data, broadcasted position, velocity (horizontal and vertical) and flight direction. The algorithm method was to create an unpassable virtual sphere around each drone whose radius was calculated as speed multiplied by mass. The faster flew and/or the heavier the drone was the larger the sphere around it.

An additional and requisite requirement for competing the task was the creation and implementation of an automatic landing system on an identified platform. The students used IoT and real-time advanced camera image recognition techniques to fulfill this requirement.

All flight were monitored by representatives of the Polish Air Navigation Services Agency and Civil Aviation Authority in real-time on the DroneRadar platform. 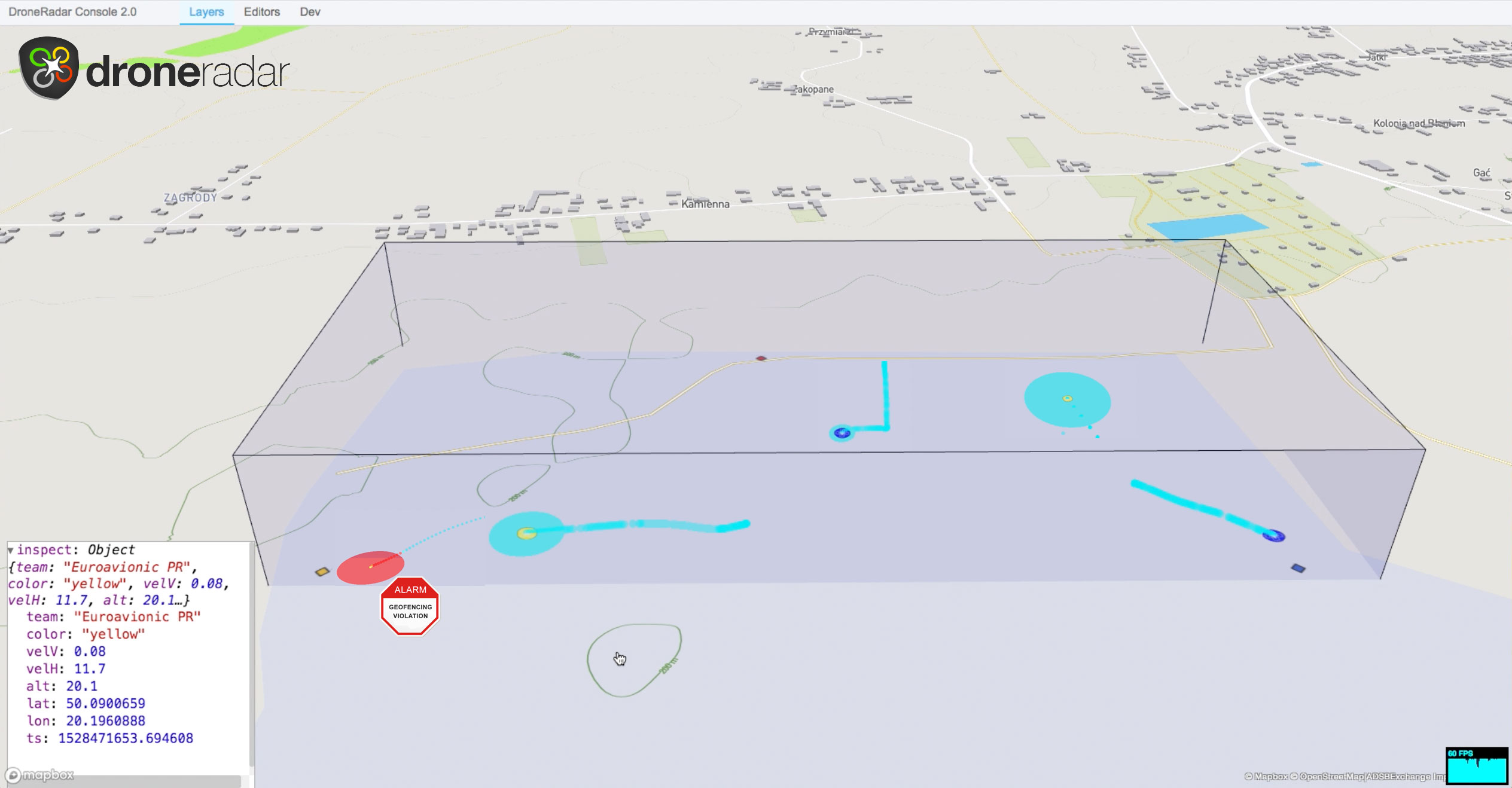 Without doubt, the unique value of Droniada 2018, was the fact that all the autonomous missions were conducted in the same airspace by different teams connected only by the same rule set, which was a global first. The task that each team received had been described in alignment with European and local regulations. Upon analysis of similar competitions around the world probably no one as of now took chances on conducting large number of multiple flights in the same time and airspace without contacting team first. This test was done this way on purpose in order to test the time needed and the feasibility to implement the solution.

Droniada 2018 is the Polish prologue to U-Space, an EU initiative which is to open the sky in cities to automated services carried out by drones. It is worth mentioning that the Ministry of Infrastructure is closely monitoring and supporting all activities regarding autonomy both on the ground and in the air.

The team from Politechnika Rzeszowska was also commended by ULC for the exemplary preventing of a crisis situation during a drone mission.

Conclusions
There is one special conclusion which is the most important. It has been proven that we have the necessary knowledge and technology resources to implement new infrastructure for automatic and autonomous drone services on an industrial scale. It is also worth to mention, that SORA analyses can be performed for ARC (Air Risk Class) levels 1 to 4.

Airspace digitalization is now underway. Thanks to the DroneRadar, available since 2015 in Poland with over 50 000 users, local government, whose role in managing urban areas will be growing, are going to be attached to this process.

Droniada 2018 has proven that with institutional support polish innovators will be able to provide the infrastructure and technology to support mass drone flights as soon as 2019.

What now ?
The conclusions from Droniada 2018 will serve to implement new legislation and strengthen the voice of Polish innovators in the construction of European and global legislation.

About Droniada 2018
Honorable Patronage for Droniada 2018 was extended by Prime Minister Mateusz Morawiecki, President of City of Jacek Majchrowski and CEO of Polish Piotr Samson.

Droniada 2018 had the following partners: The National Center of Research and Development, Polish Development Found and national U-space program called Żwirko i Wigura. The Dorniada 2018 was also supported by JSW Innowacje, the owner of test polygon for U-space.

Spartaqs Sp. z o.o. is the strategic partner responsible for serum delivery beacons, and tech support. Support for U-Space development was provided by dlapilota.pl, the author and creator of the DroneRadar.